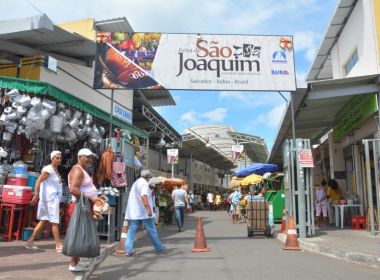 The Government of Bahia has published a call for bids to hire a company to provide archaeology services for the works of the second stage of the requalification of the Feira de São Joaquim, in Salvador.

The information appears in Wednesday’s edition (21/4) of the Official State Gazette, in the Companhia de Desenvolvimento Urbano do Estado da Bahia section (Conder) and is signed by the president of the Permanent Licensing Commission, Maria Helena de Oliveira Weber.

The company that will perform the intervention is Andrade Mendonça, for R$ 26,808,226.13. The resources come from the Ministry of Tourism.

The project includes the construction of a new structure, with a constructive pattern formed by warehouses for the sale of varied products, a parking lot, and a perimeter road with a promenade on the edge of All Saints Bay. In all, the requalified area totals more than 9,000 m2, departing from the area already renovated by Conder, in the direction of the ferryboat.

During the construction period, part of the street vendors will stay in a temporary space, called “Galpão Água de Meninos”. The construction takes place in an area contiguous to the fair’s loading and unloading yard, next to the ferryboat terminal. The estimated value of the work is R$ 4 million.

(Updated at 20:37 for inclusion of the company that won the bid for the construction works).